Freddy King – Wind direction can make or break a hunt test. Paying close attention to wind direction when lining our pups up for the next mark or blind is paramount. Any help we can give our pups on their next line to slightly cast them down wind of a mark or bird will help tremendously in picking up a bird successfully. Always pay attention to where your pup is looking and the wind direction.

Christian Staller – Remember that dogs hate to be casted into the wind.

Hunter Shell – If I’m honoring through re-bird, or no bird I’ll come off the line to keep the dog calm. Cause for a lot of my dogs get worked up just sitting at the line with all that going in the field especially with a re-bird. To combat what your talking about the dog may think it’s getting another bird, I teach a no bird cue. When I give that cue, the dog never picks up the birds it sees fall.

Freddy King – I tend to agree with Hunter. If I’m at the line with a “hot” dog and it’s a re-bird situation I’ll commonly use that situation as moment to train coming off the line and even at times putting pup on lead. Lots of times pups will think they’re in trouble. Even more if it’s a bad throw and a no-bird is called by the judge. More times than not the pup will think they’ve moved or did something not quite right, sit better and mark the birds even better. But all dogs are different!

Hunter Shell – It really depends, started marks shouldn’t exceed 75 yards, seasoned is 75 I think also, maybe 100, and finished marks are 150. In AKC the rule book says I believe should not normally exceed 150 in all 3 levels.

Harry Gillmore – I think the marking distance isn’t really the hardest, it’s the deliver to hand and blind retrieves that really determine what level you can title.

Bill Evans – I think most people that run started/junior test are people that train their own dogs and they are both getting use to the test environment. I believe a pup should be solid on obedience, force fetch (FF) and able to be handled if necessary before running any test.

Hunter Shell – The only time you can’t talk to the dog, is from when you signal for the birds till the judge releases you to send.

Harry Gillmore – My dog, even though FF, will occasionally drop the bird at the water’s edge. Am I allowed to say hold just prior to him getting out of the water?

Hunter Shell – Yeah you can do that, or at least I’ve never seen a judge fuss about that at junior.

Jeffrey Ervin – Exactly, a male stopping to pee on every bush or piece of grass on the way back to you is using up memory!!

Huston Kennedy – This is so true…. I finally worked up the nerves to ask a question and the judges were like, “Is that it?”

Glen Scarborough – A good judge will invite any, and all questions. Trust me there are not any dumb questions. We have all been in a situation where we didn’t ask because we thought it was dumb, or would make us look that way only to find out later multiple people had the same question, and didn’t ask either!

Mary Lynn Metras – But do take the time before your next test to work to correct the issue rather than dig yourself into a hole and get more frustrated!

Glen Scarborough – Practice loading a shotgun with poppers in training. I always prefer the handler to sit on the bucket then loading. Don’t point your gun at the honor, judges, or gallery when loading. If you prefer to stand while loading that’s ok, but remember gun safety. If you gun jams during your test keep going. The judges are the only people who can stop the test, and will if they deem necessary. Jammed guns will be addressed by the judges, or marshal, so just keep running your dog unless told to do otherwise. Always shoulder your gun. Just try to keep the mentality that you are using a shotgun with live rounds.

Jeffrey Ervin – You can’t take that handle home with you either!

Bill Evans – Judges don’t care how many whistles! As long as you challenge the line and make progression toward the blind! 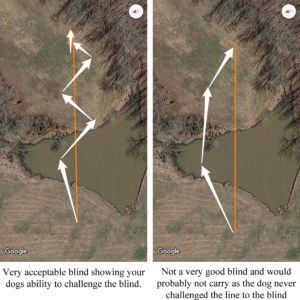 Jamie Moss – That’s interesting! When I judge, I always scent the area heavily before we start so everyone has an even playing field.  When I run, I’d rather go first and stay out of the drag back. Water- I Agree 100%!

Glen Scarborough – Handling in the AOF (area of fall) is always going to be at the judge’s discretion. Each mark to each test has its own AOF. When you blow a whistle on a mark to cast your dog you have ended being judged on marking, and started judgement of handling. Quick efficient handling is always preferred over extended hunts, but usually the handle will cause a mark down.

Doug Abel – I still make a mistake sometimes by removing bird with my left hand, when Barney is on my left. 83 year old Mr. Jack Hansen nails me every time I do it and threatens to use his heel stick on me!